So we had a scare last week when I woke up at 3am, soaked in bright red blood. And my heart broke - because at 9 and a half weeks, I was pretty sure what that meant. We had to wait three hours in the ER until we could get an ultrasound to see what the baby's status was. Amazing the little guy/gal was in there, kicking, with a strong heartbeat, but the doc put me on bedrest for a few days. When I was able to get in to see my ob, she said that it was likely overexertion that bruised the implanting placenta, which caused it to bleed, and the blood just had to drain, so out it came. After she cleared me from bedrest, she cautioned me to be careful, but I ended up with more spotting the next day, and so she told me in no uncertain terms that I had to take it much easier. Fortunately, our timing at moving a 5 minutes drive from my mother-in-law was impeccable, and the ward has been so kind.

I've heard from various sources that this isn't uncommon for many women in their first trimester, but I've never experienced it before. And the sentence of bedrest is terrifying for the mother of any young children.

Guys, I was steeling myself for a miscarriage. And oh, I've always had compassion for those of you who have dealt with them, but my empathy is much deeper now. Those first couple days, when the doc discharged me from the ER with instructions about a "possible miscarriage/abortion", hoping that the cramping didn't start and that I'd stop bleeding - it was just awful. That first night I clung to Luke in bed, afraid to go to sleep because I was afraid to wake up to more blood. It was an emotional rollercoaster that I feel like I still haven't quite recovered from, and thus far my prognosis is good! Blessings on the heads - and wombs - of all mothers and all mother hearts.
6 comments:

A cake that I didn't massacre! 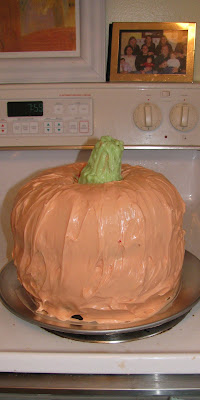 I pulled the recipe out of some ladies magazine - a from scratch pumpkin carrot cake with cream cheese frosting - delicious! It's a pastel cousin of the one in the magazine, but I just couldn't stand adding more food dye!
3 comments:

Amanda finally gets to go to a ball!

Well, the UVU Presidential Scholarship Ball, that is. It's the university's fanciest annual event; this year they announced $4 million in new scholarship money. (Valet parking, red carpet, string quartet, cirque du soleil style acrobats, black tie - we're hoping to get Luke a tux next year...) A friend gave me this vintage gown with a train - although it may not be the most flattering style on my bloated first trimester body, it was fun to dress up. 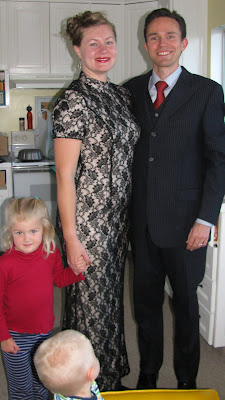 We had a yucky weather Saturday recently, and we all needed to get out of the house. We made it to BYU's (free!) Bean Natural History Musuem at the end of the reptile show. 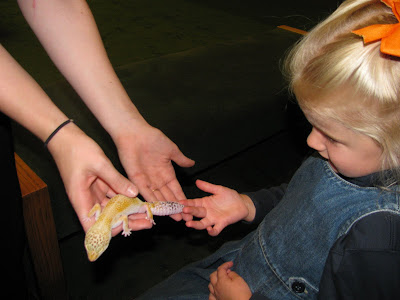 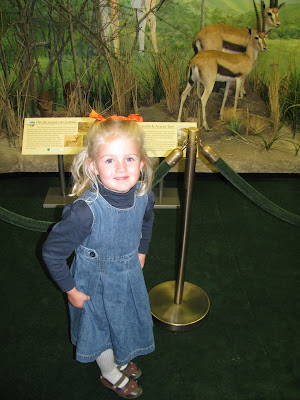 Afterwards we braved the Bombay House with the kids. Dean really took to the tamarind dipping sauce. And when the rice arrived to accompany our two entrees, Dean decided the serving bowl was his. We ended up having to order another round of rice because Dean wasn't sharing. 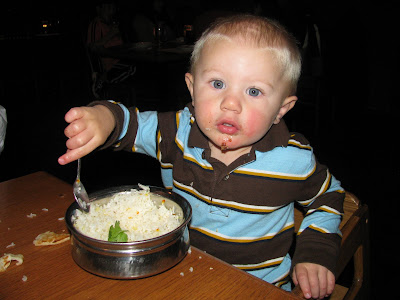 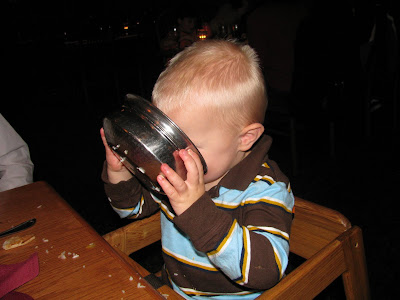 (It must be in his genes; when Luke and I were dating/newlywed, if either of us were sick, the other would pick up an order of basmati rice and saag shorba soup from Bombay House.)
4 comments: 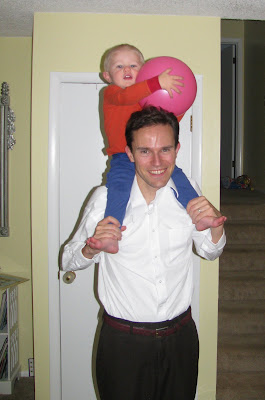 It hasn't been a good day for Dean unless he gets to ride on Daddy's shoulders - even better if he gets to throw balls from great heights!
1 comment:

Luke really wanted to do yellow in the living areas, so I colormatched Behr to Glidden's Lemon Ice. It's a beautiful yellow...I still prefer blue, but it's fun to let Luke have his way every once in a while...People, you know I don't clean up my house for photos! 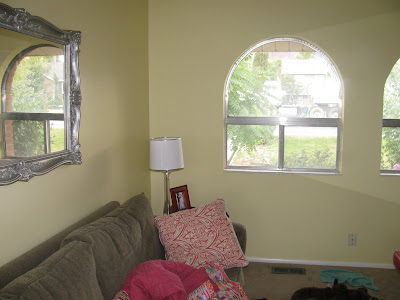 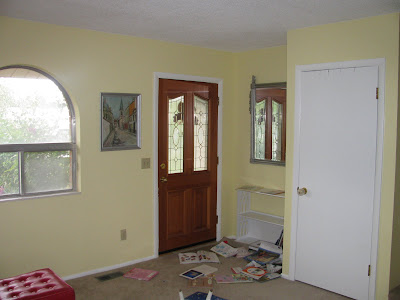 We love the arched windows in the living room; bets are they will be particularly expensive when we replace all the windows; the same windows are in the kids' rooms. And yes, I'm really getting curtains for these windows, and yes, this house is absolutely in a state of still needing to be organized/decorated. And wow does it need new flooring! I haven't decided what to do about the front door. I don't love the style and its security vulnerabilities scream "Warning, warning" every time I look at it. Time will tell.

This little wall separates the living from the kitchen area - and I love how clever I was: the small abstract piece by LDS artist Leslie Graff (a friend gave me an original!) hides our thermostat! 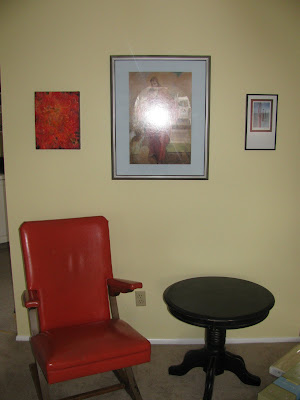 Our cute little kitchen is cute and little but it's ours. I love that the cabinets go all the way up to the ceiling! And I love my little sink window that looks out to the juniper bushes on the back of our lot line. And isn't that colius plant fly? Look at that color! A friend of Cristie's that owns a greenhouse in town gave it to us as a housewarming present, and I've already taken a cutting to start another. 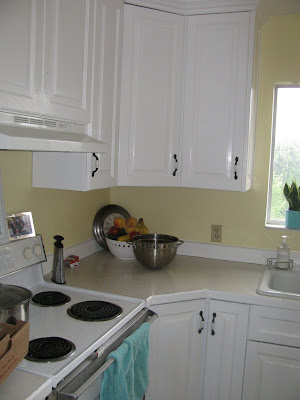 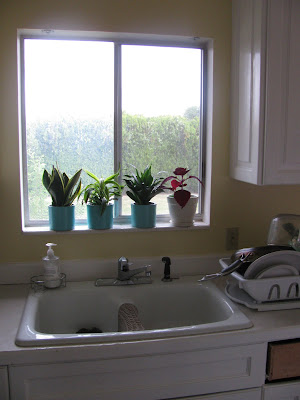 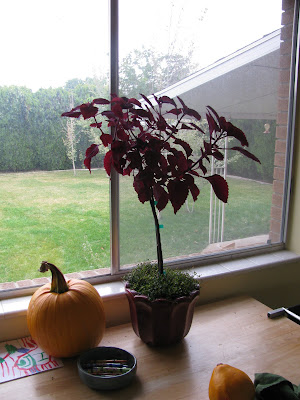 Okay, check out these lights. Luke and Cristie were talking about the stagecoach lights in the kitchen, and I thought it was some nickname for the style of light. Oh no, that is an actual stagecoach on the globe! And the globes have MULTIPLE different scenes of stagecoaches on them. Anyone with a Jane Austen BBC fetish want them? Because I have a matched set - one in the kitchen, and one in the dining area. Wow! 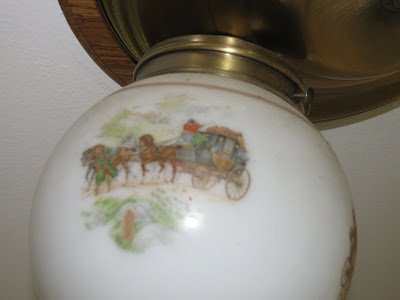 Fall Is a Pumpkin Patch 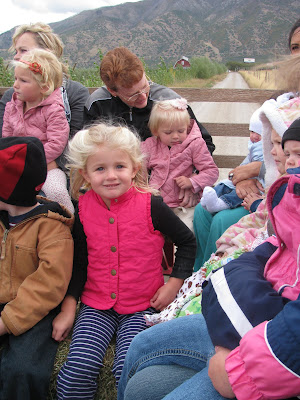 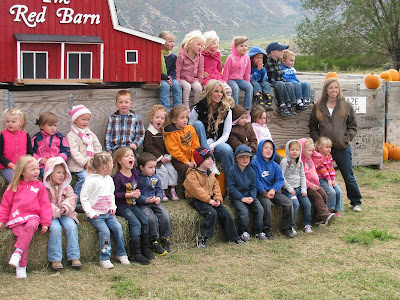 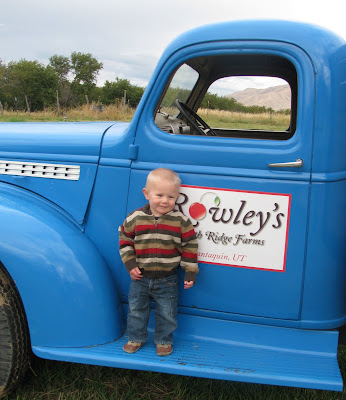 I thought that an apple orchard's apple cider donuts were strictly a New England thing. Fortunately I found some in our backyard at the Big Red Barn in Santaquin. (Apple cider cake donuts being superior to any other cake donut, and any cake donut being superior to any yeast donut!) Laurel's preschool class had a field trip today, and it was a cool blustery hayride. Her preschool class seems enormous - but the field trip was combined with the morning and afternoon kids, the T/Th attendees, and there are 5 teachers and 2 classes at each preschool session on each day. (Sidenote: running a preschool is a great business, we pay a healthy tuition but love our return - enthusiastic teachers, the pledge and a patriotic song each morning, lots of learning...I salute my friends who homeschool but I sure couldn't do it!)
3 comments: 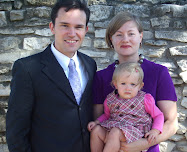